What’s the most commonly-consumed drink in the USA? Is it coffee? Coca Cola? Maybe another soda?

No, it’s water of course!

We all need it to live, and need it to thrive, but it’s easy to forget about.

In actual fact, water is an incredibly complex topic.

Water has an affect on every part of our lives, from our health, to our day-to-day happiness and the running of our homes, to how our food is grown and our power is produced.

Increasingly, water is going to become a concern for all of us. That’s true both personally and globally, and includes issues of climate change and water scarcity.

Finally, water is big business! It’s an ever-growing market around the world.

In this article I have broken down every important fact about H2O that I could find, and I hope that you find them all interesting and informative. I’ve even made some informed predictions about what the future of water might look like as we move towards it being a very precious resource.

Water Consumption in the United States (US)

Water infrastructure in the USA has historically been good, but in the past few years it has been faltering. Climate change is having an effect on how much water there is to go around, and trends in water usage and in the consumption of water are shifting the landscape of US water.

In fact, in the last few years an awful lot has changed! 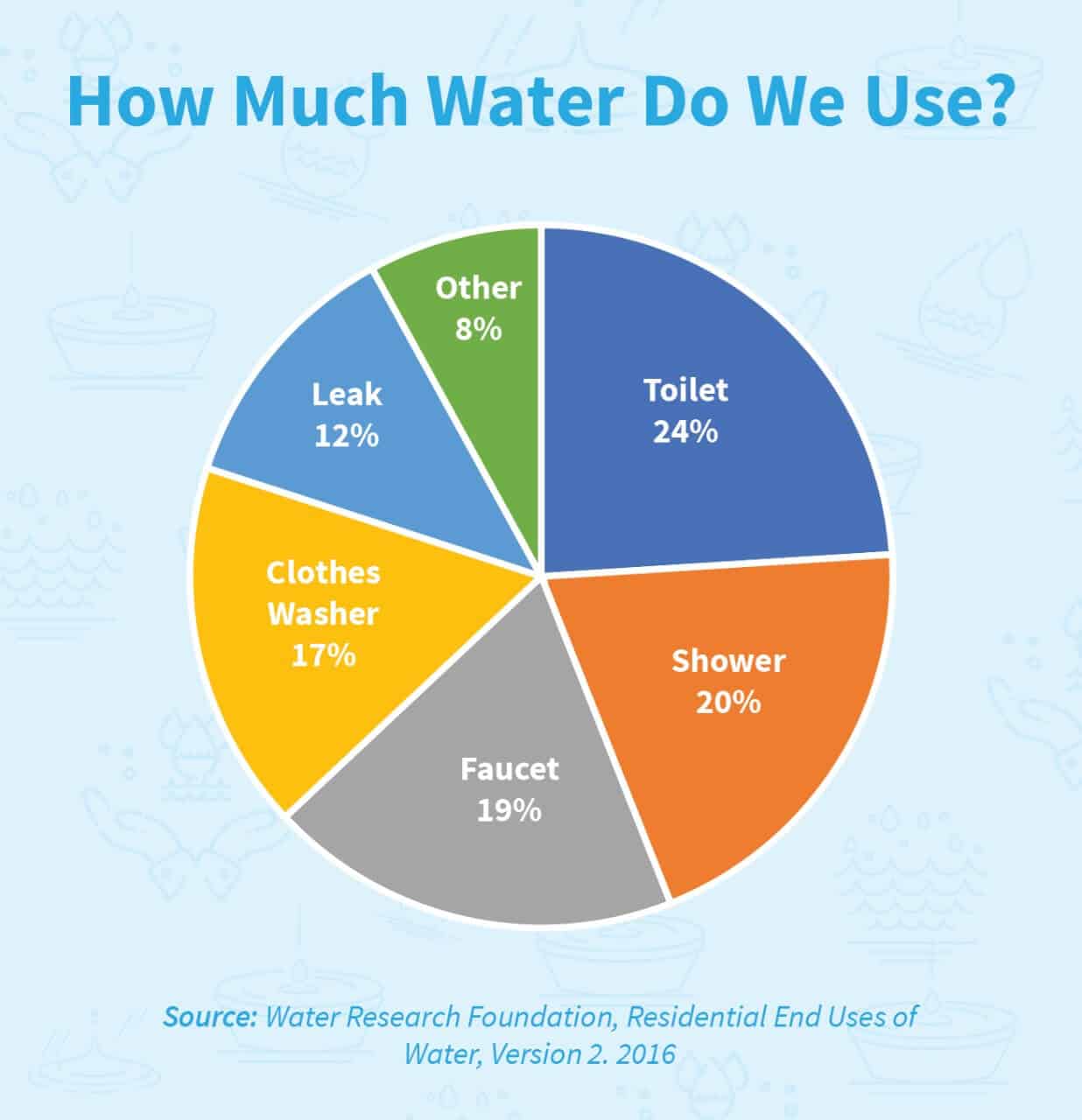 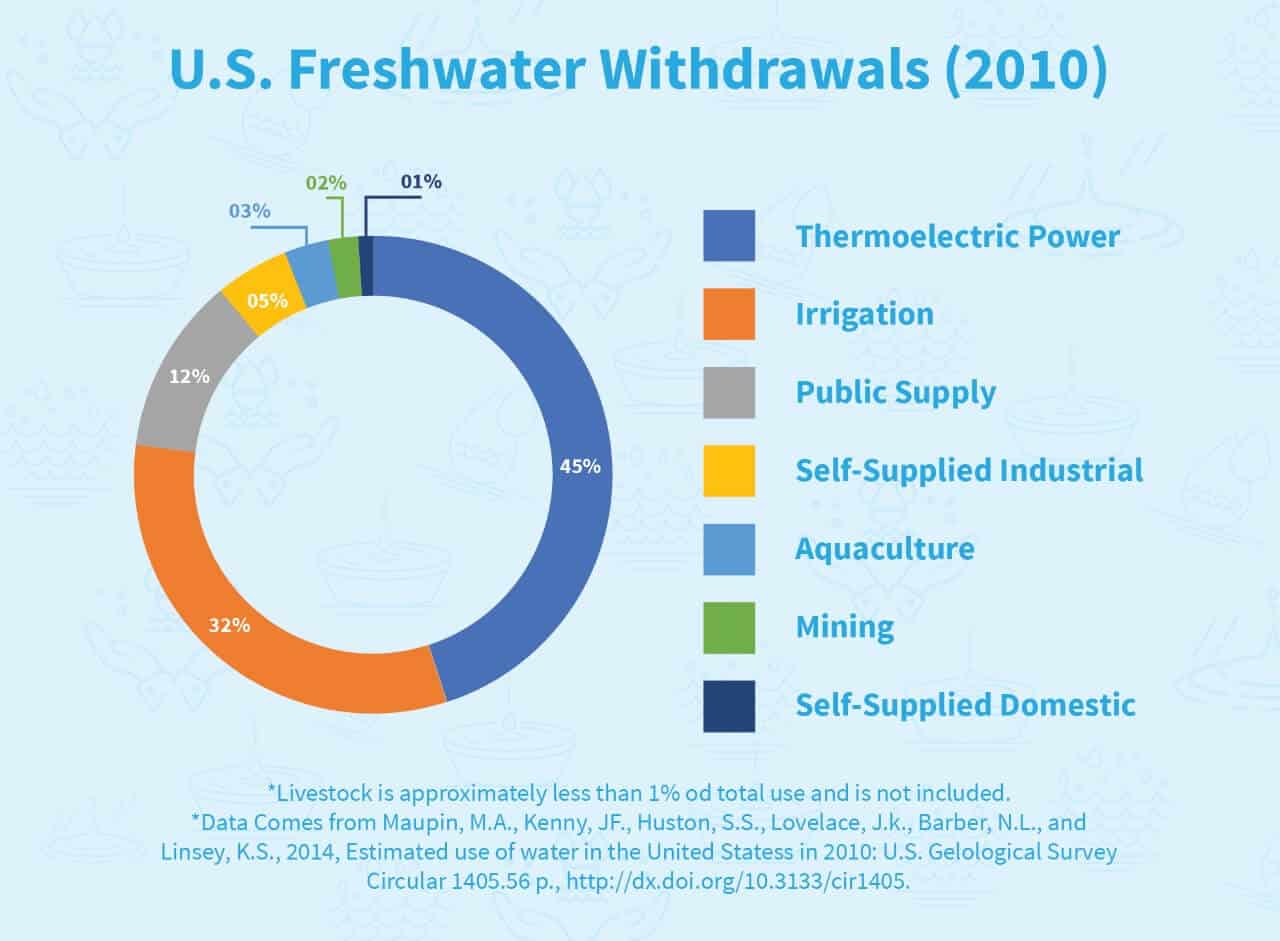 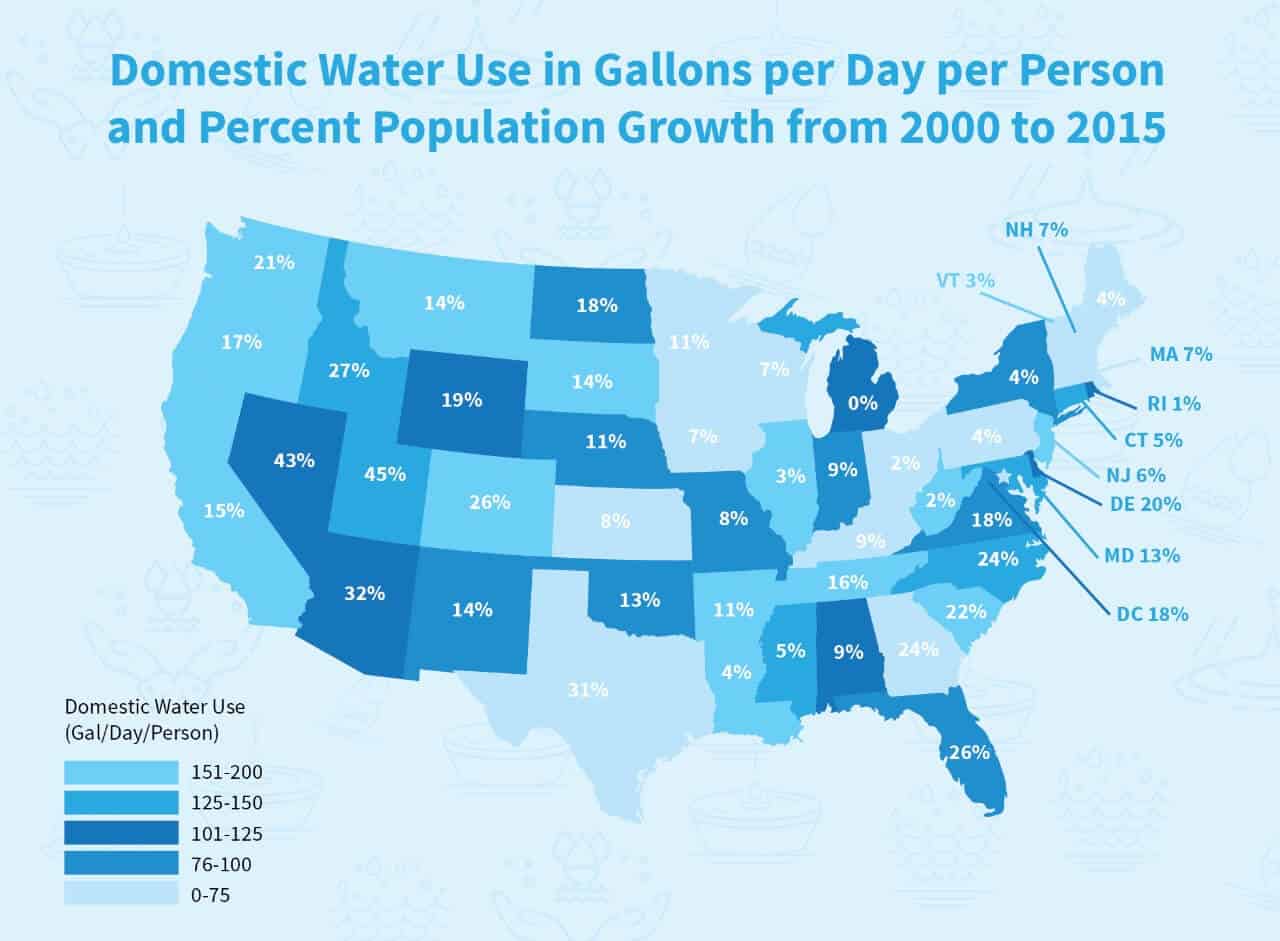 This issue may lead to one or more of the following:

Bottled water is either a necessity or a luxury, depending on where in the world you live.

In most of the USA, you can drink the water that comes out of the tap but that’s not true all around the world. And anyway, sometimes it’s far more convenient to grab a bottle from a store or the fridge at work. In other countries worldwide water is generally not drinkable, so bottled water is needed for people to survive.

Wherever you are, though, bottled water is big business!

There are four main types of bottled water recognized by the FDA. They are as follows:

This is water from a hole drilled or bored into the ground to find an aquifer - an underground layer of water sometimes trapped in rock and sand.

Like a well, an artesian well is a hole in the ground that taps into an aquifer. Artesian wells tap specifically into aquifers that are under pressure from the materials surrounding them, like clay, rock and sand. This pressure pushes the water at least part way up and out of well making it easy to retrieve.

Mineral water comes from underground, though the exact extraction method is not important to its classification. It has to contain 250 parts per million total dissolved solids, and the trace elements and minerals that make these up must come from its source. They cannot be added later if you want to water classified as mineral water.

Spring water comes naturally to the surface after flowing through underground formations like rivers or tunnels of rock. The water should be collected from the spring where it emerges, or via a borehole into the underground formation through which it flows. Importantly, the collected water must have the same composition as water collected at the spring’s mouth or it cannot be called spring water. This rules out some extraction methods, and means that collecting spring water is comparatively high effort.

Here is just a little bit of what climate change’s effects on water might lead to in the next few decades.

Water scarcity is an issue we think of as happening ‘over there’ but actually it’s becoming more and more relevant a worry in countries like the US and UK. Climate change and population growth are driving changes in water needs and the availability of water, and not always in predictable ways. 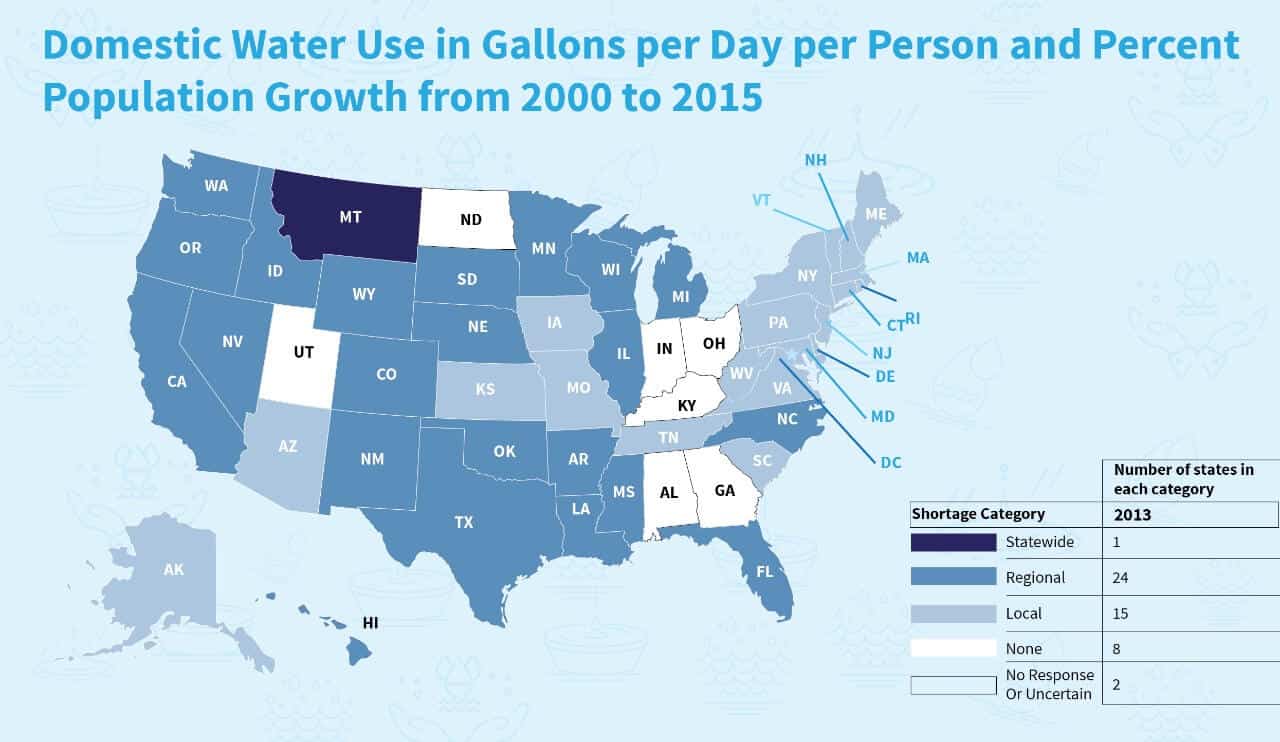 Hydroelectric energy is a massive part of renewable energy plans across the world. But how does it work? And what impact will it have worldwide?

The Science of Water

What is water? Yeah, it’s the wet stuff that comes out the tap. But deeper than that, do you know the science of water? You will when you’ve read this!

Food production is one of the largest uses of water worldwide. Increasingly, people are thinking about the water use that went into the food they consume. Plus, we are in need of producing more and more food and that’s only becoming a larger issue. Water is intrinsically tied to food production, and here are a few reasons why. 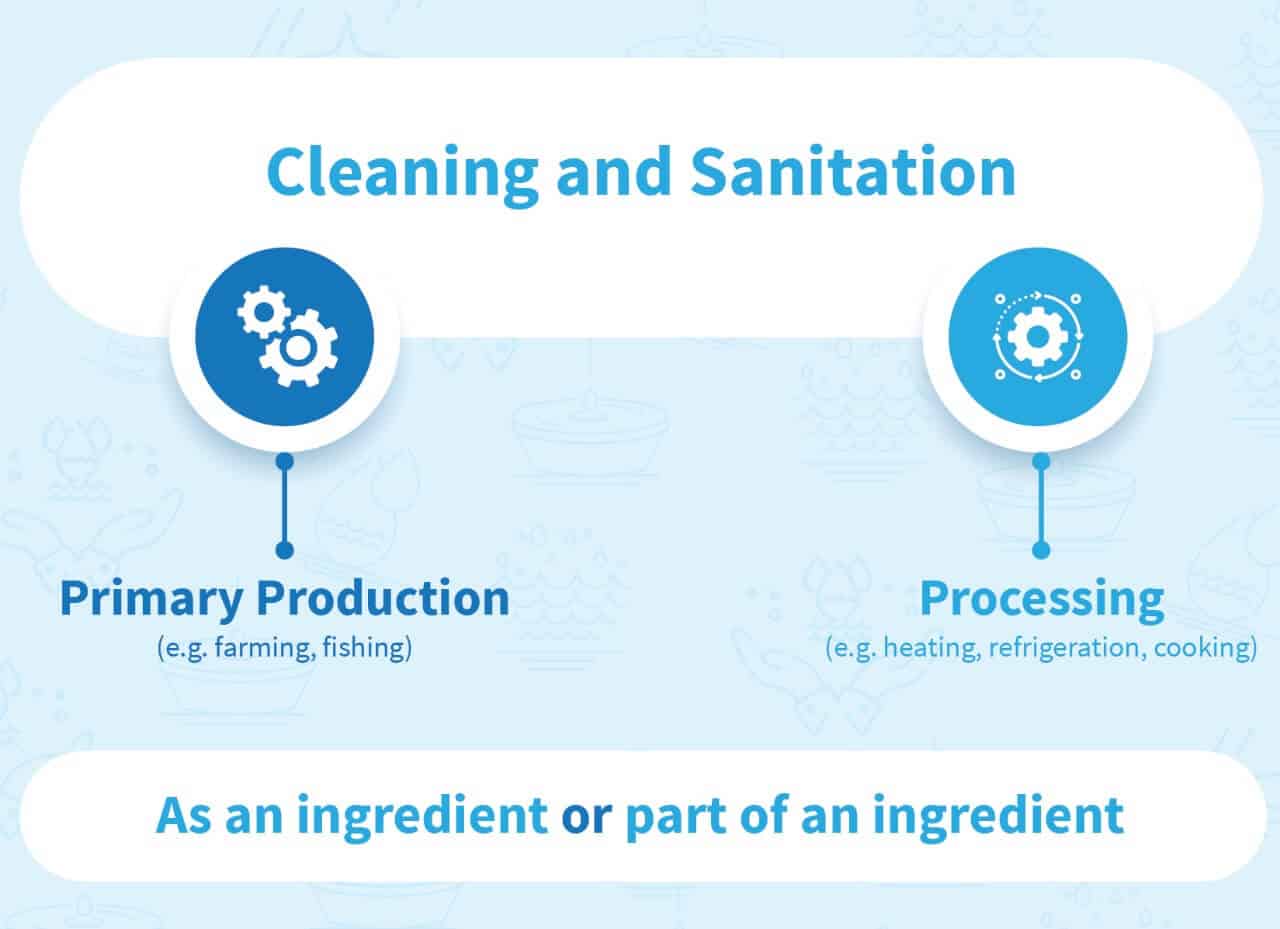 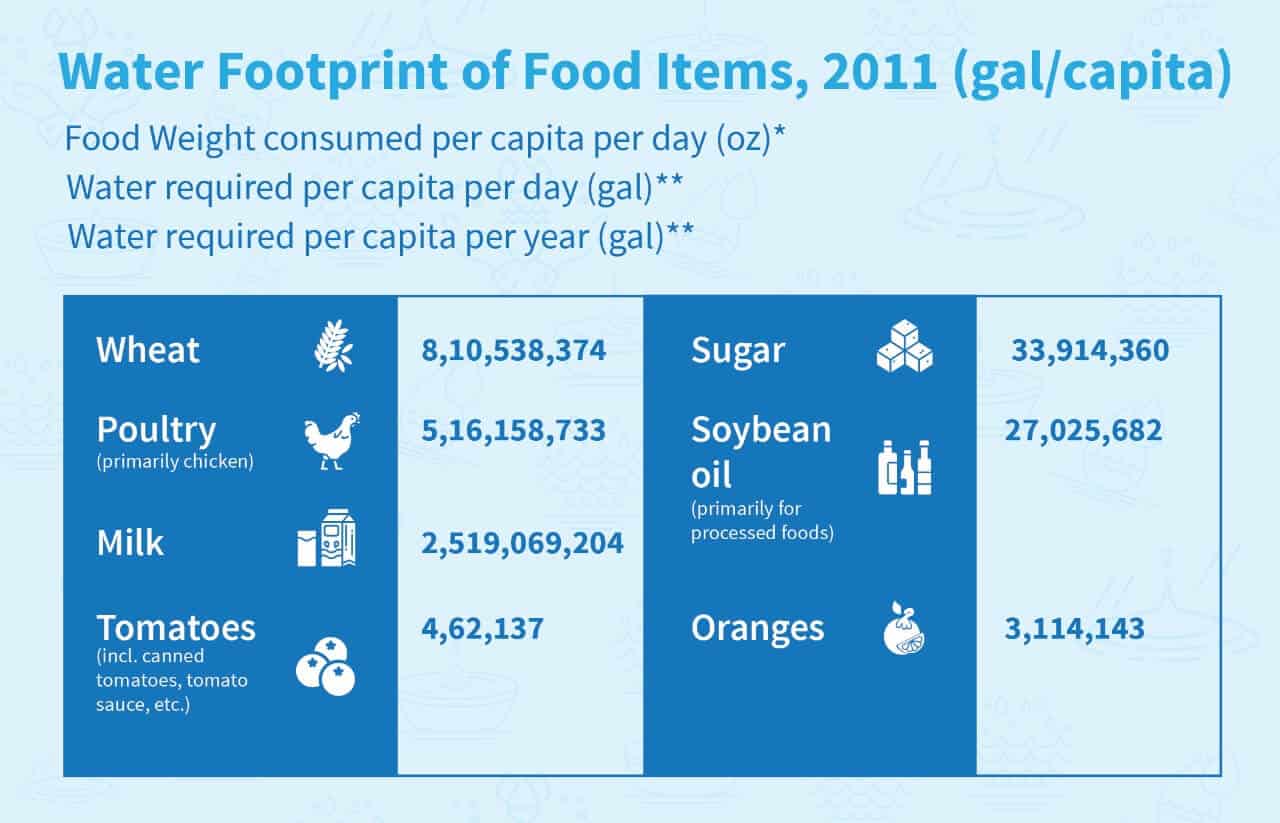 The way water is used on space missions will probably inform future water recycling technologies on Earth. In addition, finding water outside our atmosphere shows us a lot about what might happen in future here on terra firma, or what the possibilities of water are. Water in space might seem like an outlandish thing to be interested in, but it is actually very relevant to ongoing water policy.

Water is really important for everyone’s health, but you probably know that in the abstract. But why is water so necessary to health? Well, for a start your body is about 60% water. Some important parts are even more water-based. Your brain, for example, is 73% water and so is your heart.

The whole "you need to drink enough water" thing is starting to make sense now right? But beyond that, drinking enough water has a palpable affect on your day to day health and wellbeing.

I’ll go into the key points below, but if you want to know more you can have a look at my comprehensive piece on the 17 most wonderful benefits of water.

The Future of Water

The future of water is all about making the potable water we have go further, and creating more potable water as cheaply as possible. Of course, another key aspect of ensuring that everyone on Earth has access to clean water is reducing our personal usage where we can.

Tips to Save the Water

Of course, conserving water and using it as well as we possibly can is a large-scale global problem. But in some ways it is also personal - as mentioned earlier, the average American family uses 300 gallons of water per day at home, and more at work and in pre packaged drinking water. So making small personal changes could make a difference if we all did so!

It’s clear from these stats that water, or sometimes the lack of it, is deeply entangled with all of our lives. From grabbing a bottle of water after your run, to treating yourself with a bath, to running the dishwasher, you use water constantly.

Sure, on a personal level drinking water is really important for our health and the normality of our lives (I mean, you would not be happy if you could only shower once a week would you?). But increasingly, water is becoming an issue of global security too. Not everyone has access to it, and that is going to become more and more true.

Of course, if we all thought just a little more, and took a few steps, then we could all help save water. It sounds a bit school science fair, doesn’t it? But it really could make a difference! Check for leaks, take showers, minimize your water usage in the garden. I mean, we can hope that some of the amazing water innovations being worked on right now will save us all from water stress but that’s not a forgone conclusion.

As well as revealing our personal water responsibility, these stats tell us a lot about the future of water. Bottled water is an ever-growing business, and as a sign of an expanding international wealthy middle class it will only continue to expand in the next few years. Add to that increasing health consciousness and many people in the US and Europe kicking soda habits and bottled water (both still and carbonated) are going to be growing markets for the foreseeable future.

It’s hard to encompass all the elements of water and its interaction with our daily lives - both behind the scenes and in the foreground. I’ve done my best, but will keep updating these stats as I discover more important information about water worldwide.